Absorbing the Six Kingdoms
During Qin Shi Huangdi's reign, the other six kingdoms of the Warring States Period, namely (Qi (齐), Yan (燕), Chu (楚), Han (韩), Zhao (赵), and Wei (魏) met their downfall in his hands. In 231 BC, Qin Shi Huang launched his first attack to uniting China - absorbing the Han kingdom. At that time, all of Han's land were captured by other kingdoms especially Qin except Nanyang (南阳) and Xinzheng (新郑). Qin Shi Huang's general, Han Teng, attacked Nanyang. Nanyang was captured. One year later, the armies at Nanyang attacked the Han's capitol Xinzheng, and captured the last King of Han, King An.

In 229 BC, Qin Shi Huangdi launched his attack against Zhao. At that time Zhao still had a very legendary general--Li Mu (李牧). Li Mu had been against the legendary general of Qin--Wang Jian. Wang Jian knew that he mustn't launch an attack on Li Mu hastily--because he is one of the Four Generals of the Warring States. So he used an Estrange Strategem to use the King of Zhao's hands to kill Li Mu. One year later, in 228 BC, Wang Jian attacked the capital of Zhao, Handan, and captured the last King of Zhao, King Qian. King Qian's older brother, Childe Jia, escaped to the land of Dai and made himself King of Dai.

In 225 BC, Qin Shi Huang attacked the southern Wei. Wang Jian's son, Wang Ben, drowned the capitol of Wei Daliang (大梁) with the water of the Yellow River. Three months later the walls of Daliang crashed. The armies of Qin raided the city and the last King of Wei, King Jia, was captured alive by the Qin armies.

Soon after Wei was absorbed, Qin Shi Huang attacked Chu. The general Wang Jian said that he needed sixty thousand men to absorb Chu. But the general Li Xin said that he only needed twenty thousand. Qin Shi Huang thought Wang Jian was too old, so he let Li Xin go instead. Li Xin attacked Chu, but was defeated by the general of Chu, and better known as the grandfather of the Hegemon of Western Chu Xiang Yu, Xiang Yan. Qin Shi Huang was ashamed of Li Xin. Then Wang Jian stood up and took sixty thousand men and went to Chu. When Wang Jian reached Chu, he didn't make the attack immediately. Instead he told all his men not to attack. This continued for a year. Finally, the army of Chu gave up and turned east. But just as it happens, Wang Jian lets out his armies and attacked the Chu army. The army was crushed, then Wang Jian went in the capitol of Chu, Shouchun (寿春) and captured alive the last King of Chu, King Fuchu. But Xiang Yan led up another King of Chu, The Monarch of Changwen (昌文君). Wang Jian then attacked Monarch Changwen's kingdom and killed him. Xiang Yan, looking at the defeat of his kingdom, committed suicide. Chu was utterly absorbed. This year it was 223 BC. One year later, in 222 BC, Qin Shi Huang attacked King Xi in Liaodong. Wang Ben, the general, crushed the army of Yan, even though it was allied with King Jia of Dai, and captured King Xi alive. Wang Ben turned back and attacked King Jia at Dai. King Jia was also captured.

In 221 BC, Qin Shi Huang launched his final bullet of unification - absorbing Qi, the last foe. Qin Shi Huang's general, Wang Ben, now in the northern part, attacked from the north of Qi. The last King of Qi, King Jian, surrendered. King Jian was later banished into the Songbo Forest. The Qin army surrounded the forest and King Jian couldn't find any food because food transportation were all disengaged. King Jian later starved to death in that forest. After King Jian's death, the six kingdoms were all absorbed. Qin Shi Huang established his own dynasty-the Qin dynasty, and made himself the first emperor in history.
Nguon: wikipedia 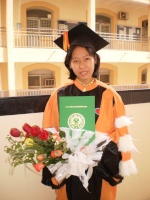