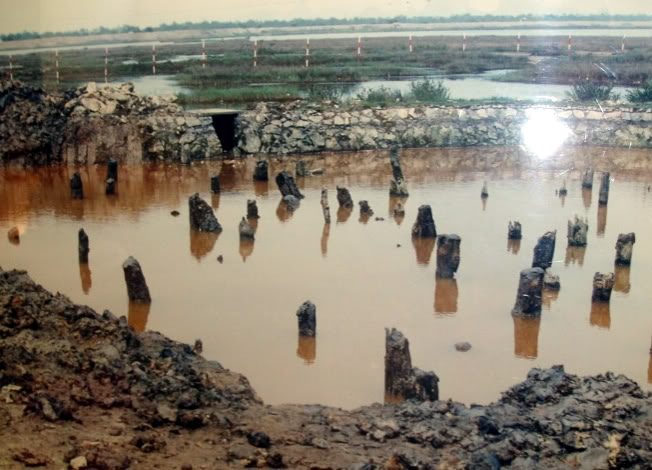 One of the ways in which the Dai Viet defeated the Mongol invaders was the use of wooden stakes sharpened at both ends and driven into the river bed. Clever use of fire vessels and a falling tide forced many of the Mongol vessels onto and against the stakefield.- Associate Professor Mark Staniforth, Maritime Archaeology Program - Department of Archaeology, Flinders University 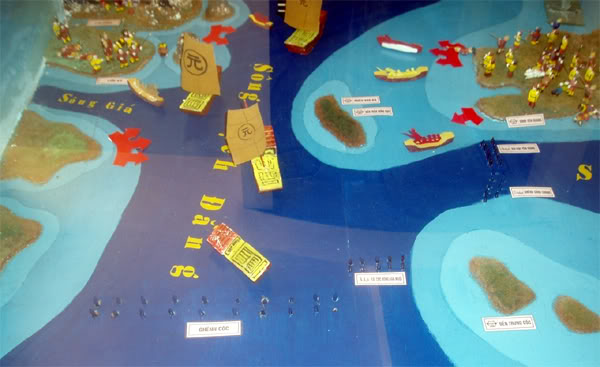 Map in the Vietnamese Military History Museum: Hanoi Stake field(s) extend across the Bach Dang River and across the Chanh River.

In late May and early June 2008, an international team from the INA, the Maritime Archaeology Program at Flinders University, and the Historical Association in Vietnam conducted an intensive survey in northern Vietnam with the generous support of the RPM Nautical Foundation. The purpose of the survey was to record two wooden anchors that had been recovered by a local fisherman from the Red River and to identify the significance and archaeological potential of a historic battle site on the Bach Dang River, near Halong Bay, where an invading Chinese and Mongol naval force sent by Kublai Khan had been trapped and destroyed by the Vietnamese in 1288. The Bach Dang area is a unique maritime cultural landscape that reflects seven hundred years of tradition associated with a major naval battle largely unknown in the west, unlike Kublai Khan’s earlier, and more famous naval defeat in Japan six years earlier.

The Vietnamese regard the battle of 1288, in which warrior-prince Tran Hung Dao snared the Mongol fleet in a narrow part of the river, as a particularly historically and culturally significant victory. Tran Hung Dao’s troops and local villagers had set huge wooden stakes into the riverbed at low tide. When the Mongols entered the trap at high tide, the Vietnamese attacked, and held the Mongol fleet at bay until the tide fell. Unable to retreat, the Mongol fleet was then destroyed by fire rafts while the invaders who waded ashore were killed.

Some of the stakes were exposed by riverbank construction of a fish pond in the 1950s. In the 1980s, the Vietnam Institute of Archaeology excavated and recorded hundreds of the wooden stakes that remain in situ on the Bach Dang’s now silted-in foreshore. The INA/Flinders/History Associates team visited the site, and with the help of local villagers pinpointed where thousands more stakes, as well as the remains of the fleet, should be located. The team also documented a series of temples dedicated to Tran Hung Dao and his victory. The team plans to return to Vietnam in 2009 to work with the Vietnamese to record the battle site, conduct a survey, and begin test excavations to find the Khan’s lost ships.

In Hanoi, the team documented stakes from Bach Dang that are now in museum collections and then turned their attention to the anchors. The two large wooden anchors are currently stored in a private house in the city. The owner purchased them from fishermen who had snagged them in the Song Hong, or Red River. The National History Museum of Hanoi and History Associates wanted to know if these anchors were associated with the 13th-century Mongol invasion of Vietnam before acquiring the anchors for the museum’s collections. A detailed program of photographic documentation, offset measurements, and wood and fiber lashing sampling was followed by laboratory analysis and drafting plans of these intact and rare wooden anchors. It is now clear that they do not date to the period of the Mongol invasion, but instead may be from the sixteenth to eighteenth centuries. Research continues to determine their exact date.